Previous
Next
Starts from

Experience: Speed boat tour in Lisbon. This experience is a mix between adrenaline and cultural tour. The boat will stop close to several landmarks (described bellow) and you will be given a 5 minutes easy explanation of that area/monument. The connections between this check points are pure fun, with 360’s, leaned curves and high adrenaline. The team is friendly and very careful with everyone on board.

Route: The route can be modified according to the event type, or if you have booked a private tour. Contact us for more info.

Prices: Prices are per ticket. No need to book the full boat. This is a shared experience.

Departures: The boat has fixed schedules that will be given to you when booking. Any questions please contact us.

Commerce Square is located in the city of Lisbon, near the Tagus river. The name of this square is also known as Terreiro do Paço square, because here it was located the Royal Family residence, until it was destroyed in 1755. After this tragic day, this square was reconstructed under the guidance of the architect Marquês de Pombal, responsible to remodel all the destroyed parts of Lisbon. This square was build in the 16th century, when King D.Manuel I build a new royal residence, the Ribeira Palace, by the Tagus River. Here it was also build the port Ribeira das Naus. The name, Square of Commerce, came from the importance of this port to the economy of Lisbon, as the boats were unloading it’s goods in there. The bronze statue in the middle, represents King José I, it was inaugurated in 1775, designed by Joaquim Machado de Castro. This square has been classified as a National monument of Portugal since 1910. The best way to see the square is from the river, on a boat tour. Boats stop in front of the square, where you will be able to see the different hills of Lisbon and the St Jorge Castle, in Alfama. The best pictures for this monument are from the water. The angles are stunning. On the picture gallery we will show you a few. A bit of history now: Construction of the Christ the King monument was first approved in a Portuguese Episcopate meeting, on April 1940. It represents mainly a plea to God for releasing Portugal from entering in World War II. However, this idea had originated earlier on a visit of the Cardinal Patriarch of Lisbon to Rio de Janeiro in 1934, soon after the inauguration of the statue of Christ the Redeemer in 1931. In Brazil there is the famous Christ Statue called Cristo Redentor built in 1922 and finished on 1931. 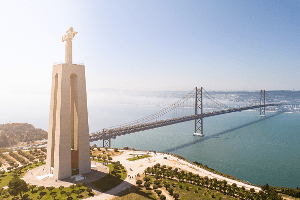 Tower of Belém, located in the estuary of the Tagus river in Lisbon, was built between 1514 and 1520. It was used as a defense tower in Lisbon. It’s windows close to the water were used to place the cannon in the direction of the lower part of the boat. The cannon balls would do a ricochet effect over the water, hitting the boat on the lower part, closer to the water, so it would sink faster. This Tower is one of the main icons of Lisbon, it receives more than 1 million visitors each years and it was classified by UNESCO as Cultural Heritage of Humanity. This Lisbon boat tour, you will have the opportunity to view it from the water, the best angle for pictures and discover it’s mysteries. This monument was first constructed in 1940, for the world Portuguese Exhibition. It was build with wood as a temporary monument Twenty years later it was rebuilt in cement and rose stone. It represents a ship with three sails, full of Portuguese historical figures from that time. In the front we have Infante Dom Henrique holding a small vessel called Caravela. He was the big mind behind the Portuguese Expeditions. There is also the poet Luis de Camões, Vasco da Gama, crusaders, monks and cosmographers. Inside you will find an space with temporary exhibits, and there i salso an elevator that can take visitors to the top of this monument. It’s the perfect view for a photograph of Belém area. Amazing pictures can be taking from the boat, for sure the best angle! 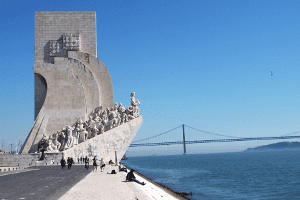 This monument is inscribed on the UNESCOS world heritage list. It was founded by King D.Manuel I and it’s located on one of Lisbon’s most noble areas in Belém. This monastery still preserves most of the structures that contributed for it’s world recognition, so it’s definatly a most go! Visits to the Jeronimos Monastery: October to April -> From 10 am to 5:30 pm (last entry at 5 pm) May to September -> From 10 am to 6:30 pm (last entry at 6 pm) The monastery closes on Mondays and on 1 January, Easter Sunday, 1st May and 25th December. 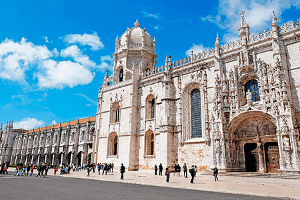 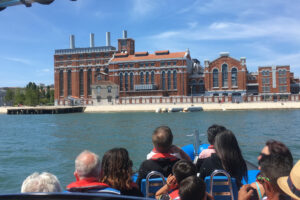 This amazing palace was constructed in the 18th century, when King John V planned to build a summer residence in Ajuda area, very close to Belém. After the big earthquake in 1755, which destroyed 70% of Lisbon, including the Royal family residence, in Praça do Comércio (Ribeira Palace), this building was used by the Royal family as the main residence, as it was higher and more protected from future natural threats. Inside you will find amazing collections of decorative arts from the 15th century to the 20th century. When to visit? The amazing Ajuda Palace is open from 10:00 until 17:00 every day, except for Monday and public holidays. Prices: Adult 5€, Child 3€ and free every Sundays between 10am and 2pm. The best way to get there is catching a tram, electric scooter of Tuk Tuk. Amazing pictures can be taken from the boat! 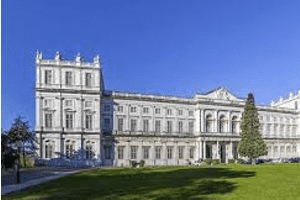 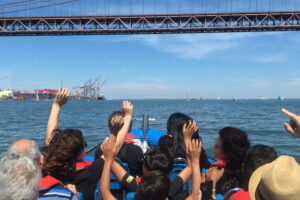 This bridge was inspired on the Gold Gate bridge in San Francisco. You will be amazed with the details of it. Reasons to Visit Lisbon for your Hen Weekend

After preparing everything for the big day, it is time for you and your bridesmaids to prepare for the hen weekend. Keep reading this article and discover all suggestions we have prepared for hen weekend. The best ideas for your Bachelorette Party in Lisbon

A bachelorette party can seem overwhelming to those who have never planned or even attended one. But we are here to give you some well-needed tips. Keep reading Are you organizing a stag boat party in Lisbon? We got you covered with some amazing ideas! Best attractions in Lisbon for families

In this article, we will present you some of the best Lisbon attractions for families. 7 Stunning Portugal Boat Trips Portugal’s sea and rivers await sailors from north to south as they pass through Madeira and the Azores. These boat